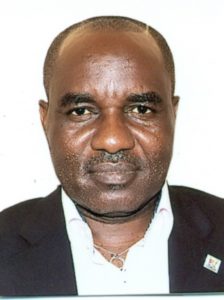 Engr. Lateef Ayodele Somide was born on 2nd June, 1965. He had his early education at Jamatul Islamiyat School, Ikorodu between 1971 and 1977 and his secondary education at Muslim High School, Sagamu, Ogun State between 1977 and 1982. He obtained National Diploma in Civil Engineering at Ogun State Polytechnic, Abeokuta now Moshood Abiola Polytechnic, Abeokuta between 1983 and 1985 and later proceeded to University of Benin, Benin City between 1985 and 1990 where he had Bachelor of Engineering in Civil Engineering. He also obtained a Master in Business Administration [MBA] (Production & Operation Management) from Lagos State University, Ojo, Lagos in 2002.

Engr. Somide was employed as Traffic Operation Officer into the Lagos State Civil Service in December, 1993 after the National Youth Service between 1991 and 1992 where he won the State NYSC award for best Youth Corp member of the year with automatic employment in the then Ondo State.

His appointment was converted from Traffic Operation Officer to the post of Civil Engineer Grade I in January, 1995.

He was Area Engineer at various Local Government Areas under then Ministry of Works & Transport where his duties included the design and supervision of Drainages, Bridges and Road Construction such as Pedestrian Bridge at Mile 12 in Kosofe L.G.A., Construction of Owode Onirin to Ikorodu Road in Kosofe & Ikorodu L.G.A., Reconstruction of Network of roads in Ajeromi Ifelodun L.G.A. to mention a few.

Between January, 2004 and December, 2010 he was an Assistant Chief Engineer and Chief Engineer responsible for supervising the activities of 15 Area Engineers out of the 20 L.G.A’s in the State. He also facilitated regular Community meetings with involvement of Public Infrastructure Improvement Partnership Programme (PIIP) in Road Construction, Rehabilitation and Improvement in the State. Engr. Somide represented the Ministry of Works & Infrastructure as a management consultant in Lagos State Waste Management Authority. (LAWMA) in the Construction of Land fill sites in the State.

He was promoted in January, 2011 as Assistant Director Civil Engineering and in January, 2014 as Deputy Director Civil Engineer in the Project Planning & Design Department of the Ministry of Works & Infrastructure where he coordinated the activities of the Engineers within the Department as it affects requests from the public and MDA’s in all the Local Government Areas of the State, reporting to the Director.

He is also saddled with the responsibility of ensuring that execution of Civil Engineering Policies/Programs affect the Larger population positively and see that Government Standards & specifications are strictly adhered to and not compromised.

Some major projects executed by the State Government designed and supervised by Engr. Somide included;

On Tuesday, 2nd January, 2018, he was deployed to the Road Maintenance & Rehabilitation Department in the Ministry of Works & Infrastructure as Director.

He is happily married with children.