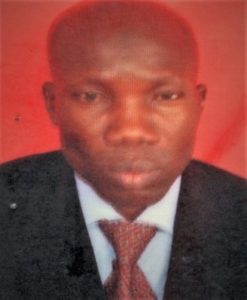 Asani Raji was born at Wesere in Badagry on the 5th January 1967. He began his Primary Education at Sawa Primary School, Sawa, Badagry in 1973 and completed in 1980.

He had his Secondary education at Kankon Secondary School, Kankon-Badagry between 1980 and 1986 and Lagos State School of Basic Studies, Badagry in 1987 where he completed his West African School Certificate.

He bagged his membership of the Nigerian Society of Engineer [NSE] in 2001 and his COREN in 2002.

Engineer R. Asani started his working career with the Ministry of Works and Infrastructure in 1996 as a Pupil Engineer GL 08. Between 1996 and 1997 he was moved round the different units within the Department among which are Lift Management, Motor Vehicle Maintenance, Operation Unit, Research and Fabrication, Consultancy and refrigeration and Airconditioning Maintanance. He was confirmed and advanced to GL 09 in 1997

Between 1997 and 2003 He was made Head, R&A Unit and saddled with the responsibilities of supervising maintenance work, supervising procurement and installation of R&A equipment. Having been promoted Senior Engineer G L 10 in 2001

Engineer R. Asani was in the Ministry of Water Front and Tourism Corporation between 2003 and 2005 as a Principal Engineer GL12 where he supervised R&A maintenance, Generator maintenance, Building-Plumbing system, construction of water and sewage line in the Tourism Scheme (1) Lekki and involved in Roads and drainages construction works for the Tourism Scheme (1) Lekki.

In 2005 Engineer R. Asani was redeployed back to the Ministry of Works and Infrastructure to Head the Engineering Service and Consultancy and saddled with the responsibilities of maintaining R&A equipment, to oversee staff matters/welfare, Design and Supervision of implementation of Mechanical installations in building construction projects.

He was at the defunct Ministry of Rural Development between March and July 2015 and later Ministry of Chieftaincy and Community Affairs till September 2015 where he headed the Rural Water, supervision and Certification of the Local Government roads, Drainages and Building construction projects.

Between September 2015 and November 2016 as an Assistant Director Mechanical Engineer, he was in Lagos State Public Works Corporation and charged with the responsibility of maintaining heavy duty and Earthmoving equipment for road construction and maintenance, managed and scheduled equipment for road maintenance works within the 57 LGs/LCDAs.

His hobby is includes Travelling, Reading and Walking