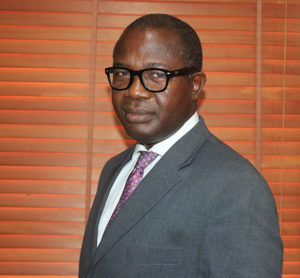 Engr. Olutokunbo Olayode Oyenuga was born in Lagos on the 21st of September, 1967. He is an indigene of Imota in Ikorodu Division of Lagos State.

He was at the University of Ilorin, Kwara State between 1983 and 1988 where he obtained a Bachelor of Engineering in Civil Engineering and thereafter participated in the mandatory National Youth Service Corps 1988/89 at the Nigerian Defence Academy, Kaduna, Kaduna State.

On his return to Lagos, he was engaged as a Resident Engineer’s Assistant by the Lagos State Ministry of Works as a Contract Staff and was charged with the responsibility of overseeing quality control through the supervision of all mandatory laboratory and field tests on the Coastal Road Project [Eleko – Folu]. This was between October, 1989 and January, 1992.

Engr. Oyenuga was employed into the Lagos State Civil Service in April 1992 as Executive Engineer II and was deployed to the then Ministry of Environment & Physical Planning, Development Control Department where he spent the first 11 years. This Department later transformed into the Lagos State Urban & Regional Planning Board in 1998 where he served as a District/Local Planning Authority Engineer, at various times, for Ikorodu, Epe, Kosofe, Somolu, Mainland & Surulere LGAs and rose to the position of a Principal Engineer.

He was deployed to the Ministry of Works & Infrastructure in January 2003 and served in the Planning & Design Department and was actively involved in the Ministry’s Consultancy activities with MDAs, Design of Public Buildings and Road/Highway Design. His diligence to duty and capacity for work led to his being selected thrice as the Officer of the Month which also earned him the State’s Year 2005 Productivity Award.

In October, 2004 he was posted on assignment to the Lagos State Private Sector Participation [PSP] Authority where he rose to the position of Chief Engineer. Here, he was the Schedule Officer directly responsible to the Authority’s Executive Vice Chairman and who actively participated in the execution of the first road concession agreement with Messrs Lekki Concession Company for the Eti Osa-Lekki-Epe Expressway. The functions of this Authority were later handed over to the Public Private Partnership [PPP] Office when this was established in December, 2011.

Consequently, Engr. Oyenuga was redeployed to the Ministry of Works & Infrastructure, Civil Engineering Department; he was the Zonal Co-ordinator responsible for Agege, Ajeromi-Ifelodun, Alimosho, Surulere and Ojo Local Government Areas of the State. He served at various times as the Resident Engineer for the Apapa CBD Roads, Gaskiya/Sari Iganmu Roads, Assistant Chief Resident Engineer for the Reconstruction of Lagos-Badagry Expressway and Chief Resident Engineer for Ijegun-Isheri Oshun-Isolo [Jakande Estate], LASU-Iba Road [Additional Works], Ishasi Road, Ojo, Alaba-Cemetry Road, Ajegunle, e.t.c. He was promoted to the post of Assistant Director in Year 2012.

In February 2016, he was deployed to the Ministry of Housing, Engineering Services Department to deputize the Director and also oversee infrastructural projects [Water, Sewage, Roads/Car Parks, External Electrification and Structural components of buildings] within Government Schemes at Ajara, Sangotedo, Igando, Egan, Igbogbo, Iponri, Omole, Magodo, Odo-Onasa-Agbowa amongst others as well as Joint Ventures with the Private Developers at Imota, Ilubirin, Isolo and Iganmu. He was one of the recipients of Year 2018 Letter for Effective Job Performance from the Head of Service.

Engr. Oyenuga was promoted to the post of Deputy Director in July, 2017 and was deployed to the Ministry of Works & Infrastructure 1st July, 2019 to serve as the Acting Director, Road Construction Department.

He is happily married with children.